Alien Patlu is the 24th episode featured in season 5 of The Adventures of Motu Patlu.

Warning!!! The information below contains spoilers for the episode

Patlu comes to Dr. Jhatka's lab with his eyes aching and asks for treatment. Ghasitaram is making chai and offers it to Patlu but he refuses. Dr. Jhatka injects Patlu and puts eye drops on him and tells him to sit down for a bit. Patlu sits on the stove where the chai was made and burns his bottom.

Patlu flies from searing pain goes flying and bumps into the Boxer. The Boxer loses his conciousness for a little bit but wakes up and thinks Motu hit him. He sends Motu flying with his punch. Meanwhile, Dr Jhatka calls Patlu and tells him the medicine makes him be able to see back confusing Patlu.

As Patlu is walking, he unawaringly grows two extra antenna eyes. Suddenly children start following him and he doesn't notice anything and kicks the kids away from following him. While this is happening, Jon and his goons steal jewelry from the store and Motu appears to fight them off. Patlu joins the fight with a stick and uses his back vision from eyes to beat Number 1 and Number 2.

At this point, Motu shows Patlu his 2 extra eyes from a mirror and Patlu freaks out and begins a series of vulgar insults about him. Patlu then starts crying when Ghasitaram calls him a alien. Ghasitaram helps Patlu stop crying and tells him Dr. Jhatka will be back and he should stay hidden.

Meanwhile, Aliens in a UFO go searching for their lost son Poltu, when they see Patlu in their UFO as possible reason, they assume they found found him and head to earth. Once they are earth, they pick up Patlu mistaking him for their son try taking him back. Patlu screams for help and runs to Chingum's police station.

Dr. Jhatka finally comes back and fixes Patlu's 2 extra eyes and they explain the long story to the Alien parents. 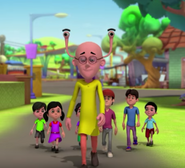 Patlu unknowingly gets followed by childen

Patlu gets taken away by aliens
Add a photo to this gallery
Retrieved from "https://motu-patlu.fandom.com/wiki/Alien_Patlu?oldid=9901"
Community content is available under CC-BY-SA unless otherwise noted.