Appu is a circus elephant in Motu Patlu and makes his appearence in the episode "Gulabi Hathi." He was originally from Maya Circus although he had a very cruel and abusive owner.

He is small sized elephant with a dark grayish colored coat. Unlike other elephants, Appu does not have tusks which is typical for Asian Elephants. Appu has tufts of brown hair on top of his head and wears a tracking bell collar so his owner knows where he is going. His tail is quiete bushy with tufts of brown hair as well.

When Appu fell into the tubs of paint, his whole body becomes colored pink. His collar, hair, and tail get pink as well. His paint never washes off even at the end of the episode.

He is a quiet friendly elephant and treats Motu and Patlu with respect after they help him escape. He is not very aggressive for a male elephant and this may be due to his younger age. Appu enjoys doing circus stunts and tricks including flipping, skateboarding, and walking on rope. Appu also enjoys attention, he happily ate the gulab jamun offered by Chaiwala as pink elephants were considered a symbol of good luck in their culture.

He has very strong physical strength, being able to pull Motu and Patlu with ease due to him being an elephant.

Appu is very weak and afraid against his owner, he almost decided to stay with his owner instead of going to the national park. He is afraid of being whipped and tries to do the best he can.

Appu almost falling of a bridge 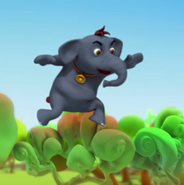 Appu's original color
Add a photo to this gallery
Retrieved from "https://motu-patlu.fandom.com/wiki/Appu?oldid=9504"
Community content is available under CC-BY-SA unless otherwise noted.