Motu Patlu (some episodes and minor role in some movies)

Boxing and Beating others (notably Motu and Patlu)

Strength
Boxer (Hindi: बॉक्सर) is a recurring character in Motu Patlu. He is known for punching Motu and Patlu from reasons from not wanting to tell him what they are doing to destroying his car.

Boxer is Motu’s neighbor who wears red boxing gloves, a white tank top, and red pants with vertical yellow stripes. He is an aggressive man. He always wants to help his neighbors but he gets angry and beats them up. He also has an expensive car which gets destroyed by Motu. In “Boxer’s Baby”, it is also shown that he is not a good parent and could not get his son, Sunny, to sleep.

Boxer and Chingum's relationship often depends on what is going on in the episode. Often, Boxer and Chingum cooperate to punish Motu and Patlu if they have hurt them, even if it is unintentional. However, if Chingum does somehow anger Boxer, he ends up bearing the brunt of his anger.

Motu and Boxer have a somewhat love-hate relationship. If Motu somehow angers Boxer (examples include ruining Boxer's car, calling him the wrong name, accidentally falling on Boxer, not responding to a question of his, etc), Boxer often ends up punching Motu. However, if the two aren't at conflict with the other, they can be very good friends, and can even help the other.

He is a muscular man who wears a white banyan and has red boxer gloves, a mustache and a light stubble from his beard. Behind his shirt BOXER is written in red and orange outline. Sometimes he also wears a black or dark red shirt with jeans. In the new Motu Patlu redesign, he has a fist shown in his shirt. He often wears his black/red shirt and jeans in the redesign as well.

He is a hot-headed and kind of rude person and behaves badly with his friends and neighbors. He is also arrogant as seen when he gets angry when Motu called him Boxer instead of Boxer Bhaiya (Boxer Brother) He is a mean bully and often unnecessarily picks on Motu and Patlu by punching them. Boxer's anger can drive him to do things that can be considered unlawful, as seen in Motu Ka Khazana when he punches Chingum. However, he can be nice towards people as long as they do not anger him. However, he is as coward as a mouse when somebody stronger than him challenges him.

He is very strong and can break through walls and punches people so hard that they go into the clouds. He can also move his car at a fast pace barehanded and run at the same time.

He is not that fast and can be be-fooled. He is also beaten by Motu(if he eats samosas).

Boxer beating up Motu and Patlu after his car is destroyed

Boxer during his happy mood 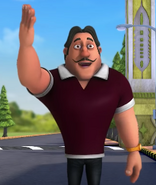