Motu Patlu (Most episodes and some movies)

Chaiwala (Hindi: चायवाला) is a supporting character in Motu Patlu,

He is a man who lives near Motu's house in Furfuri Nagar. He makes the best samosas in town, which is why his samosa shop is often full with customers, and is usually the hangout spot for Motu and his friends. His tea stall also tends to be a hangout spot for John and his henchmen.

Though he is often angry and even punishes Motu and Patlu because Motu craves samosas and eats more than he can pay for and usually indebted to Chaiwala, he promises to give Motu free samosas to energize him against enemies such as John or his gang.

He is a partially bald and fairly tall man with a sagging belly. He wears a white banyan and pajamas. He also wears a towel over his neck which he occasionally uses to wipe off his sweat.

In the newer episodes, he wears a blue-gold chef's hat and uniform.

He is a poor man who is self-esteemed and does not like to be given extra money. He also is angry when Motu tells him that he will pay the money later. When his business is running well, he can be proud. Chaiwala is also simple-minded and does not believe in gadgets' power, which appears frequently in Motu Patlu. Chaiwala is shown to be supportive of people, which is shown when he tells Motu and Patlu that they are great the way they are.

He is shown to have knowledge even if he is not educated. Given Below is a list of languages and subjects he knows.

When he is angry, he beats Motu and Patlu with cooking utensils or his bare fist. He is also relatively clever and sometimes uses this against Motu Patlu or John.

He is not strong and does not know hand to hand combat. He is also afraid of many things like tanks, dinosaurs etc.

Chaiwala listening to the radio 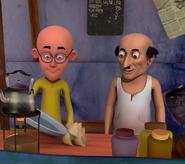