Strong teeth and able to fight people
Denture Alien is a small yet very powerful alien from the Denture planet in outer space. He makes his only appearance in the episode "Denture Alien" in The Adventures of Motu Patlu. Denture Alien is one of the most powerful characters mentioned and he easily beat up the Boxer, Motu, Patlu. It took him a period of days before his teeth got cavities from eating too many sweets and being removed. He originally was a villain but became good in the end of the episode.

He is a small round shaped alien that is very short compared to human beings and is even short compared to Jon. His skin is emerald green and has a bright glow to it. His shoes are also green although his hands are white from wearing gloves. On his head he wears a red helmet and it has holes for his two antennas to poke through.

Denture Alien is crazy over food and will eat anything edible and delicious to him. He loves food so much that he just cannot have enough and keeps asking for more and more. This may be the reason why he did teleportation to earth and visit Furfuri Nagar over the food. If he does not get the food, he will angrily bite and chomp anyone in his path. He became such as a threat that Motu and Patlu quickly had to find a solution or he would have been a dangerous threat to Furfuri Nagar. Denture Alien hates being tricked and betrayed by people and when he found out Jon and his goons Number 1 and Number 2 were using him, he taught them both a listen by a good beating.

Just like how people get cavities from eating too many sweets, so did Denture Alien's teeth. His teeth will overtime decay if he continues to eat sweets without brushing his teeth and he gets a toothache. Once his teeth hurt and unable to function, he is significantly weaker although still stronger than Motu and Patlu. 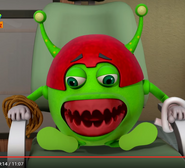 Denture Alien after his teeth were pulled out

Denture Alien beats up Jon after he finds out he was used
Community content is available under CC-BY-SA unless otherwise noted.
Advertisement