Most Episodes and All Movies

Dr. Jhatka (Hindi: डॉ. झाटका) is a scientist who resides in Furfuri Nagar. He owns a laboratory where he usually creates new gadgets.

He likes to find guinea pigs for his experiments and Motu usually becomes one. Ghasitaram also works with him in the lab as an assistant and co-worker. He is also a PhD doctor but does not treat his patients well so they run away from him.

Mostly Motu or Patlu land in trouble due to his gadgets. He then has to make an antidote for them. Motu calls him Bare Bhaiya (which means "brother"). He also has a flying car. He gives his gadgets to Motu and Patlu (or various uses), Chingum (to arrest criminals), and the army (to help them fight better). He is voiced by Saurav Chakraborty, although he was initially voiced by Omi Sharma.

He has a sister who lives in Agra. She comes in the episode Missing Dog (Indian Tour)

Jhatka has a receding hairline, he wears a green shirt, violet necktie, blue jeans and brown shoes with olive straps. He is in his mid-to-late forties.

In the newer episodes of Motu Patlu, he wears a violet shirt, a yellow shirt, a green tie, and brown pants.

Dr. Jhatka is a generous and helpful person who also knows English. He can get angry when Motu messes with his experiments. He is also wise and logical but not as much as Patlu. Though he is a good friend of Motu and Patlu, his bond of friendship is not strong enough, and when Motu and Patlu land in trouble with the law, he will not help them. Dr. Jhatka is also quite religious as he applies "oppor wale" into many things he says. He also had Motu Patlu pray in "Pilot Training" when they were in danger. He often forgets his wide inventory of things which he carries with him on important missions and often gets beaten up by Motu, Patlu, Chingum, and Ghasitaram for this. Dr. Jhatka deeply values science, considering nothing else to be bigger and greater than science.

He makes gadgets which help him to fight enemies. He is also a wise and logical person.

He does not know any hand to hand combat. He can also be be-fooled sometimes. In Duplicate Patlu, he beat his foolish patient because of their stupidity. His inventions can also be used against him and his friends.

In Furfuri Nagar, he lives in a big house.

At Agra - His Sister Mamata's home

Furfuri Nagar - He has a very small lab. 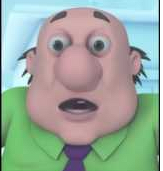 Motu's perception of Dr. Jhatka while under the effects of the Dream Medicine
Bahasa Indonesia मराठी ଓଡ଼ିଆ اردو Tiếng Việt
Community content is available under CC-BY-SA unless otherwise noted.
Advertisement