Bragging about his 20 years of experience in all fields.

Lab assistant to Dr. Jhatka and Labour Supervisior/Mukadam or Foreman (shown in one episode)

Dr. Jhatka, Motu, Chingum and Patlu
Ghasitaram also referred to as Ghaseetaram (Hindi: घसीताराम), is one of the main characters in Motu Patlu. He is a friend of Dr. Jhatka and works with him in the lab. He is also a Labour Supervisior (Mukadam/Foreman) as shown in an episode in which he was Supervising the labourers who were constructing a Building. He also claims to have an experience of 20 years in various fields, though most of the time his "experiences" don't help. Ghasitaram is stated to be from Kolkata. He is voiced by Saurav Chakraborty.

His style is a similar form of Patlu. He wears a cobalt blue tunic, violet dhoti, dark red jacket, and brown shoes, and glasses like Patlu.

In the newer episodes of Motu Patlu, he wears a peach-colored tunic, a green vest, and brown leggings. However, he also wears his normal clothing.

Ghasitaram is a coward who wants to and sometimes runs away from danger or trouble. He is the biggest coward in the gang. He is also cunning and often makes Motu and Patlu the guinea pigs of Dr. Jhatka's experiments. He also acts all childish sometimes. When he gained cloud powers, he went too far and caused destruction. In The Bulk, he refused Dr. Jhatka's injection to make him the strongest person but started acting like he wanted it to attract Motu and Patlu, showing his acting skills.

He is a witty and clever person and can sometimes be-fool Motu to fall into Jhatka's experiments. Sometimes his experience can also work and help the gang. For example, he helped Motu and Patlu in many of their businesses.

He is a coward. He does not know any sorts of combat. When he does happen to have any power/strength, he gets carried away with it and causes harm.

"Hamko iss may bees saal ka tajarba hai! (I have twenty years of experience in this!)

In Furfuri Nagar, he lives in a simple house which is firstly for rent but after some time they purchase the house from their house owner.

Ghasitaram reveals his age in the episode "Lost Island".

Dr. Jhatka and Ghasitaram covering up a fight. 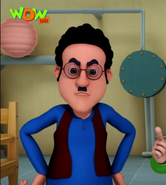 Ghasitaram blushing at the prospect of getting married.