The mind does not function on an empty stomach.
- Motu

Motu Patlu (All Episodes and Movies )

Motu (Hindi: मोटू) is one of the two titular characters of Motu Patlu. He is the main protagonist of the series who loves samosas. He is voiced by Saurav Chakraborty. Motu is voiced by Ben Bledsoe in the English dubbed episodes and EMS Murali & Sebastian in Tamil.

Motu along with his best friend Patlu lives in a small rented house located in Furfuri Nagar.

In the movie, Motu Patlu in Alien World, he was separated from his father when he was 6-7 years old.

Motu has a habit of calling people Bare/Boro Bhaiya (Big brother, in English).

He has a great addiction of samosas when he smells them, he gets attracted to it. He can eat hundreds of samosas. He usually dreams about samosas or him eating a mountain of them. He also wants to do social work but mostly lands in trouble with his best friend, Patlu.

Even though he is not skilled in any job, he still tries to do jobs like Constable, Ward Boy, Cleaner, Delivery Boy but brings trouble to the company/organization where he is working and gets fired. He sometimes even makes his own businesses, mostly with Patlu, Dr. Jhatka, and Ghasitaram, but these too fail, mainly due to Motu's foolishness. However, due to his strength, power, and will to fight evil, he often defends his town against enemies, which is why he is considered to be the biggest enemy of burglars in Furfuri Nagar.

As he doesn't own any job, the money he owns is probably from the rewards he gains from the government, usually due to the commendation of the police or the Mayor and the small amount of money he can make from his businesses and jobs.

He is a short, fat man in his 30's-40's. He wears a red tunic under a black vest. He is balding around the head area but has hair around the ears. He has a rather kempt mustache. In Furfuri Nagar, he had kept a mustache that had gaps between them. Motu's pajamas are red and white with samosas plastered all over them. When he shifted his home to Modern City, his clothing remains as his signature red tunic and vest, which is now a lighter shade of blue in the redesign. In Europe Tour & Indian Tour his dressing remain the same.

Unlike Patlu, who is quite humble, Motu is very hot-headed. He dreams of fame, fortune, and lots of samosas. His body automatically rushes towards it, and is so attracted to them, that if he smells it his body will force itself in the direction of them. He is also very impatient and a lot of times the gang falls in trouble because of his impatience. Motu is selfish as he goes after many things without knowing them properly. Motu is a plump man. Due to his lack of intelligence, he is the brawn of the gang. Motu is also lazy when it comes to housework, shoving the duties to Patlu, and getting annoyed when Patlu tells him to do the work sometime. It is shown in some episodes and movies that Motu has a habit of sleepwalking and often ends up punching objects or people, including Patlu. He believes in horoscopes whereas Patlu and other friends doesn't believe in horoscopes.

Patlu is Motu's best friend. The main show concentrates on their adventures together. However, Motu can be a bit careless with Patlu as he has invaded Patlu's personal space many times in the show, and has unintentionally thrown Patlu into not-so-ideal situations. Despite all this, Motu and Patlu still deeply care for one another.

John is Motu's enemy. This is the show's main antagonist. John likes making fun of Motu and Patlu, along with his goons No. 1 and No. 2. However, when the characters aren't in a conflict with each other and/or scheming against the other, they approach each other quite civilly and are seen at the Tea Stall without being in a conflict.

Chotu is Motu's nephew, and calls him Motu Mamu (uncle). Munni is his mother. Chotu and Motu are very close. Motu is always delighted to see Chotu and vise versa. Munni has commented on their similarities. Chotu loves his uncle to the point where he had his mother make samosas for the both of them. He also cried when his uncle was frozen up.

Boxer is Motu's frenemy (friend and enemy). When Motu wishes for something good to Boxer, he simply punches him and says Yeh le! (Take this!).

Motu has been shown to be on good terms with Munni. Motu is often allowed to take care of Chotu and his pets and Munni served him Samosas.

Due to his natural build, Motu is naturally strong and is the strongest in his friends (except Boxer). After consuming Samosas, his favorite food; his speed, strength, vision, and intelligence are enhanced, allowing him to lift boulders and vehicles. He can also achieve said powers by just having the desire to get to his samosas, or if he is at a state of significant panic. He can also beat down multiple opponents at once, and even a person as strong as Boxer is easily beaten by him. As a child, he was able to walk 5 kilometers (3.106 miles) to Dr. Mohan Sinha's lab, as seen in Motu Patlu in Alien World. In Motu Patlu in the City of Gold, Motu was shown to know how to use a sword in combat. In Motu Patlu in the Game of Zones, Motu was seen to be strong enough to straighten the Leaning Tower of Pisa.

In Furfuri Nagar, he lives in a simple house which is firstly for rent but after some time they purchase the house from their house owner.

Motu getting on his bed

Motu and Patlu in a promotion poster for Motu Patlu: King of Kings 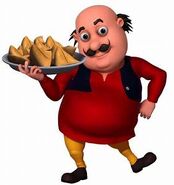 An image of Motu posing with a plate of samosas 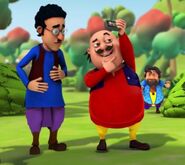 Motu taking a selfie with Ghasitaram as John watches them

Motu growling at John and his henchmen

Motu as seen in a promotional poster

The poster but extended

Motu with his friends

Motu with his friends

Motu working with Patlu for a Courier company 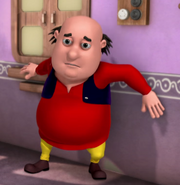 Motu without a mustache

Motu as a Stone Age Man

Motu and Patlu's name in Hindi

Motu in his exercise clothing

Motu in his boxers 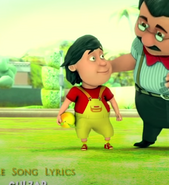 Motu as an younger child

Motu as a child. 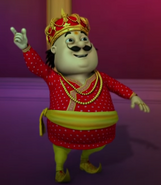 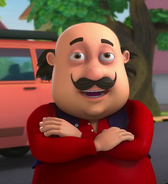 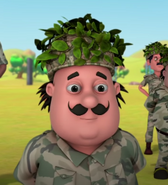 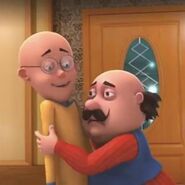 Motu being entranced by Samosas