Motu Patlu (Hindi: मोटू पतलू) is a CGI-animated comedy/fantasy television series produced by Maya Digital Studios and broadcast on Nickelodeon India and YouTube. It is created by Cosmos Maya, the same company that created ViR: The Robot Boy, Eena Meena Deeka, Shiva, Chacha Bhatija, and Guru Aur Bhole. It was first aired on 16 October 2012, with the episode "John Banega Don". The series is based on the comic characters of the same name from the children's magazine Lotpot.

The show is directed by Suhas Kadav and the theme music composer is Sandesh Shandilya. The producers are Deepa Sahi, Anish JS Mehta and Ketan Mehta. The theme song "Motu Aur Patlu Ki Jodi" is sung by Sukhwinder Singh. The Lyrics of this song is by Gulzar.

It is one of the most popular kids shows in India and is very popular in South Asia in general. It is popular in Singapore, Indonesia, Pakistan, Sri Lanka and Bangladesh. As of 16 October 2021, the show has been airing for 9 years.

In 2015, when Motu Patlu aired on Wow Kidz, it was known by its extended name, The Adventures of Motu Patlu.

Inspired from the characters of Lot Pot Comics and Series, Motu Patlu is a lively comic caper for kids as well as the entire family.

The series follows the daily adventures of best friends Motu and Patlu, who live in the town of Furfuri Nagar. They often land in crazy and comedic situations. Motu sometimes creates problems, and Patlu is the one who mostly solves them.

The main antagonist in the show is a criminal named John and his sidekicks Number 1 and Number 2 who steal things, most people's money and create havoc in Furfuri Nagar. It is always up to Motu, Patlu, and their friends to stop them.

The series' original language is Hindi and it has been dubbed into Bengali, Tamil, Telugu, Urdu, Indonesian, Sinhala, Vietnamese, and English, with English getting dubbed twice due to the first run only having dubbed seven episodes. A Spanish dub is currently in the works. There are also Gujarati, Marathi, Bengali, and Kannada dubs of Motu Patlu as well. In the other-language versions of Wow Kidz, there are Arabic, Bahasa, and Urdu dubs of several episodes of the show. Online, many episodes have English, Spanish, and French subtitles available. It is uploaded on YouTube by Wow Kidz and Wow Kidz Comedy, the YouTube channels of Cosmos Maya.

Since the inception of the television series, its creators Lotpot magazine, Maya Digital Studios, and Nickelodeon India are aggressively promoting its merchandising, the series products, and tie-ups.[1][2]

In March 2014, Nick India tied up with the Yellow Diamond chips brand for the promotion of its products across various media.[3][4] In November 2014 a major deal was signed by Horlicks for promotion of its brand with the series's characters in its marketing ads.[5] (Motu Patlu - Wikipedia)

Guddu is shown on Disney Channel, Hungama and Zee5.

Wow Kidz is Cosmos Maya's main YouTube channel. It features content from shows like Motu Patlu, ViR: The Robot Boy, Eena Meena Deeka, and Chacha Bhatija. Wow Kidz was founded in 2015 by Cosmos Maya. This information can be found in the "About" page on the Wow Kidz channel. They have a Twitter, Facebook, and Instagram page.

Production of Motu Patlu started in 2011 by Cosmos Maya. The first two seasons were done. Season 3 started in 2012, along with Season 4.

All information in this section comes from Wikipedia's page about Motu Patlu.

Motu Patlu has often been the subject of controversy. Many kids are reported to be addicted to the show, and due to its defiance of physics, kids have tried to imitate the characters by doing dangerous actions, such as jumping into pools, because of the impression that they were near-invincible like the characters in the show. It has been reported that some kids have also started to eat more samosas to gain strength despite the fact that samosas are considered as junk food.

In India, Motu Patlu airs on Nick, Nickelodeon Sonic, Nick HD+ and Rishtey. It is broadcasted or aired in other countries as well such as Pakistan, Vietnam, Nepal, Bangladesh, Indonesia and Sri Lanka. Channels include: Nickelodeon Pakistan, Indosiar, Kompas TV, Maasranga Television, NTV Plus, and Derana TV. 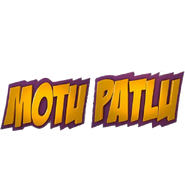 The page for Motu Patlu at the Cosmos-Maya website 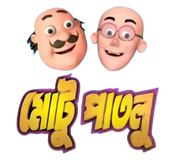 The logo for the Bengali dub
বাংলা हिन्दी اردو
Community content is available under CC-BY-SA unless otherwise noted.
Advertisement