Most Motu Patlu episodes and most movies

various disguises and hand-to-hand combat
Number 1 is one of the goons of John. He is a secondary antagonist. He helps him in his plots against Motu and Patlu, or their group of friends. He sometimes also drives John's van. His best friend is Number 2. He sometimes also disguises himself as various people, such as a bride for Patlu, a mermaid, etc.

He is a tall, overweight man in his thirties. He wears a blue French check hat, magenta striped shirt, denim trousers, and a yellow ascot. He also has a shaven head and beard with a well-trimmed mustache. In the newer episodes of Motu Patlu, Number 1 wears a green zig-zag shirt, a red ascot, and a red beret.

Number 1 is loyal to Jon and is always seen with him. He is a bit wise as he tells Jon not to mess with Motu and Patlu and credits Jon's lines as poetry.

He can disguise himself and knows some hand to hand combat. He is also clever and advises Jon not to go against Motu and Patlu.

He is not very strong and is beaten by Motu's samosa power or any other strong opponent. He can also be fooled by any clever character rather easily.

His shaven head and beard indicate that he spent time in jail.

In Lotpot, episode Motu Patlu Aur 2 Karod Ka Bag, which highly resembles the episode John Banega Don, there is a man who is supposedly Number 1, and gives Motu a mysterious bag filled with money. His name is unknown.

"Boss kuch be kariyo, Motu Patlu say Pangaa mat leo!"(Boss do anything but do not mess with Motu Patlu) 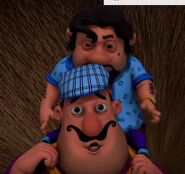 Number 1 carries Jon on his back

Number 1 and 2 take away mermaid Jon 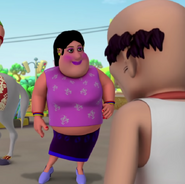 Number 1 dressed as a bride for Patlu in Motu Ki Shadi.