Most Motu Patlu episodes and movies

Number Do (nickname by Number 1)

Number 1 and John
Number 2 is one of John's goons and a secondary antagonist in Motu Patlu.

He is one of John's goons who speaks rarely and assists him in his plans. He sometimes drives John's van.

He is a tall, well-built fat man. He has a black eye and a bandaged wound on his large, round nose. but in the newer version, he is all healed and no injuries could be seen. He has black and light brown hair and a shaven beard. He always wears a turquoise ascot, green-colored shirt with stripes, a green belt with a light blue buckle, light brown pants, and white and light blue shoes. In the newer episodes of Motu Patlu, Number 2 wears a purple, striped shirt, a light green ascot, and green pants.

He is an unintelligent man who speaks with a lisp. Due to his lisp, sometimes people, including John, also lisp by mistake and it is difficult for others to understand him. Due to his lack of intelligence, he is not a planner in John's gang and usually does simple tasks like carrying John or accompanying him when the gang disguise themselves. he is also the follower of the gang.

He can disguise himself and knows some hand to hand combat.

He is not very clever, and he is fairly weak.

Number 2 and 1 during Jon's campaign for mayor

Number 2 in Motu Ki Shadi, pretending to be Motu's bride. 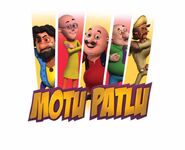